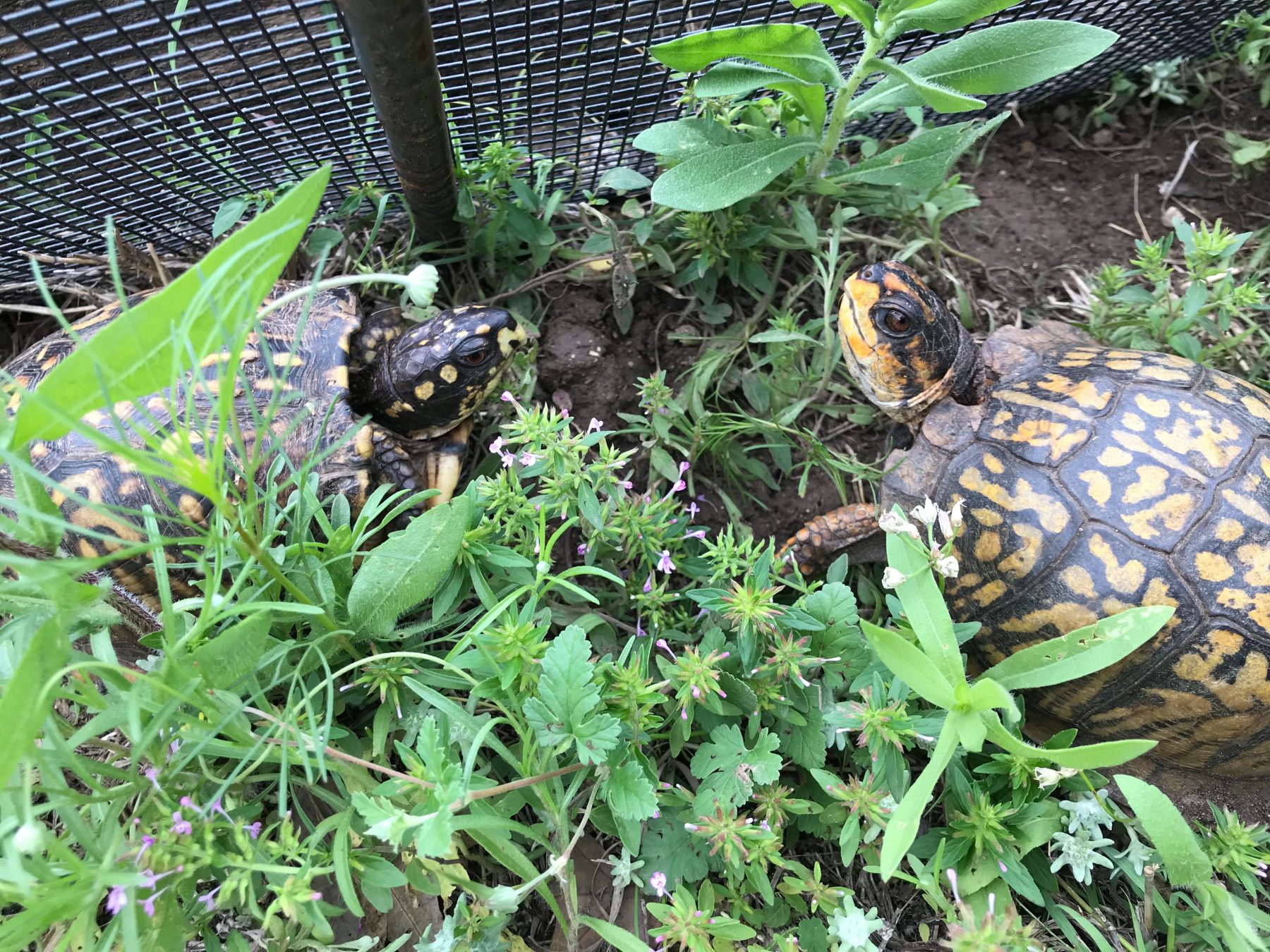 When it comes to climate change, reptiles and humans alike need a healthy and biologically diverse world to thrive

Scientific American
By Andrea C. Gore on March 22, 2019
We Are All Tortoises

The carcasses of five tortoises lie in a makeshift morgue in the shed. These were among 63 eastern box tortoises seized at JFK airport last year from a smuggler trying to take them out of the country to East Asia, where they’re valued for several reasons: as exotic pets, for “medicinal” purposes (that is to enhance virility)—and to be put on the dinner table. Customs officers handed them over to the U.S Fish and Wildlife Service, which asked Reptile Conservation International, my husband, David Crews’ not-for-profit organization, if we could take them.

This past September, David received an overnight express crate filled with the tortoises, each stuffed into an athletic sock to keep them from banging into each other; we constructed a large fenced outdoor habitat for them containing plenty of tree shade, piles of leaves for burrowing, a pond, and feeding stations. We were ready to welcome the rescue tortoises to their new home in Austin, Texas.

Unfortunately, five died over the next couple of months, due to a combination of dehydration, starvation and severe respiratory infection. They simply couldn’t recover from the time between confiscation and their arrival in Austin. I would like to give a shout-out to Fish and Wildlife; they did their absolute best to care for the tortoises, but simply didn’t have the resources. Over the next few months we tried to fatten up the rest to build up their stores to survive the winter’s hibernation. Some of them pop out now on warm days—the first sunny day in a while —and are looking good.

Terrestrial tortoises and their aquatic cousins, the turtles, are the perfect poster children for the dire consequences of human action—or inaction. Earlier this week, police in the Philippines seized over 1,500 tortoises and turtles from four abandoned pieces of luggage at the Manila airport. Habitat degradation and the fracturing of forested areas make tortoises easy roadkill. Air and water pollution have taken their toll, as have invasive species competing for resources, as happened to the Galapagos Islands tortoises.
Credit: Andrea C. Gore

Tortoises and many other reptiles are also uniquely vulnerable to even minuscule fluctuations in temperature. When their eggs are first laid, every embryo has the capacity to become either a male or a female. This may seem bizarre—a sexless embryo—but it is not terribly different from humans. Our gonads do not become male testes or female ovaries until our sex chromosomes (XY in male, XX in females) begin to activate. Turtles lack sex chromosomes in their genome. Instead, the driving force for sexual development is the incubation temperature of the egg. Other reptiles, including alligators and lizards, and many fish, also have their sex determined by environmental conditions, especially temperature.

2015 through 2018 were the four hottest years in the U.S. since record-keeping began in 1880. In January, a report in Science showed that ocean temperature increases have accelerated far faster than anticipated. How climate change will affect the survival of species in which temperature determines sex remains to be seen. If the anticipated increases in global temperatures continue unabated, by the end of the century we will likely see an increase of 2 degrees Celsius (about 3.6 degrees Fahrenheit) or more. In sentinel species such as sea turtles, skewed ratios have already been observed. This is not surprising, as higher temperatures in sea turtles, as well as eastern box tortoises, engender females. Thus, there is a very real possibility that in a few decades, only females will hatch and the species will be imperiled.

Humans are not immune to rising temperatures either. Heat leads to major health complications, especially in children and the elderly, including cardiopulmonary illness, kidney failure and pregnancy complications. Extreme precipitation can increase mosquito and other pest populations that carry infectious diseases. The Fourth National Climate Assessment report predicts adverse effects of climate change on the U.S. economy, communities, transportation, water supplies, agriculture, and ecosystems, among others. President Donald Trump repudiated this report released by his own administration. Despite his and others’ denial, the report was a nonpartisan document prepared by over 300 experts from governmental and nongovernmental domains.

The tortoises who emerged from their protective socks in September have shells symmetrically patterned with yellows, browns, and greens: autumn foliage–colored snowflakes, no two alike. The animals were in poor condition: swollen eyes, underweight, brittle shells. We fed them strawberries, bananas, and worms from a worm farm that now resides in the foyer of our house. The tortoises began exploring the habitat, heads held higher as they grew accustomed to their new Austin digs. As colder weather set in, they entered partial hibernation, only emerging on sunny winter days to warm themselves. Only later in the spring will we know how many of our box tortoises will join their five cousins in the morgue.

Fellow humans, we are tortoises. We may not have hard shells or lay eggs, but our species needs a healthy and diverse world to thrive. The decline of a seemingly mundane box tortoise might not seem as dramatic as melting glaciers, massive tsunamis and catastrophic wildfires, but each animal fills a unique and irreplaceable niche in the ecosystem.

These environmental changes happening today are due to our actions as humans. We must take responsibility for our actions for the sake of those more vulnerable than ourselves—children and tortoises alike.

The views expressed are those of the author(s) and are not necessarily those of Scientific American.
Rights & Permissions
ABOUT THE AUTHOR(S)
Andrea C. Gore

Andrea C. Gore, PhD, is a professor who holds the Vacek Chair of pharmacology at The University of Texas at Austin, and a Public Voices Fellow with The OpEd Project.